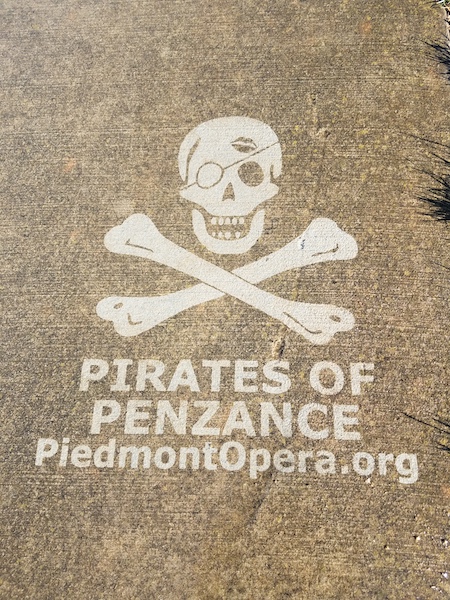 We had the honor of creating some Clean Graffiti for Piedmont Opera in Winston-Salem, NC. The reverse graffiti was used to help promote an upcoming show, the Pirates of Penzance. The show is running this Friday, March 23 at 8pm, Sunday, March 25 at 2pm, and Tuesday, March 27 at 7:30pm at The Stevens Center of the UNCSA (405 4th St NW Winston-Salem, NC 27101). Tickets & additional information can be found here.

Our Clean Graffiti was used as an alternative to other outdoor advertising options. It’s different, eye-catching and co-friendly. We use a specialized stencil & high-pressure water to make a contrast in the dirt. The message that is left behind is not only highly-targeted, but it is a beautiful contrast in mother nature. Tickets for the show are still on sale. Check out Pirates of Penzance at the Piedmont Opera this weekend.

We love the city of Winston-Salem and have had the privilege of doing some great Clean Graffiti projects there; The OrthoCarolina Free Workout and mammogram reminders for Novant Health to name a few. This Piedmont Opera job allowed us to promote the arts (and we absolutely love that!). If you go see the show this weekend, keep an eye out for our Clean Graffiti skull & crossbones around town.